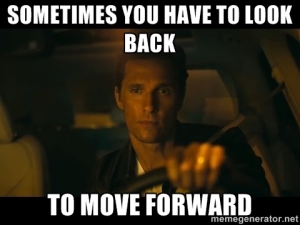 A little behind on my blogging, but before kicking off 2015, I decided to look back at my goals from last year that I posted on the blog.  I had 4 goals and I managed to accomplish half and let’s face it #3 and #4 were pretty lofty.  I will keep this in mind when setting 2015 goals.  Here’s a look at my 2014 goals:

I’ll post my 2015 goals in my next blog but again this year my number 1 goal is to run the 2015 Boston Marathon and raise $10,000 for Dana-Farber Cancer Research.   Can you help me raise the money and I’ll do all the running?  Just think of me freezing my lycra-clad bum off out there training for the race?  You can donate directly on my Dana-farber page here:  www.rundfmc.org/2015/jenniferh  or you can also consider Sponsoring a Mile (there are 26.2 of them in a marathon) for a donation of $126.20  or above.  Check out my Sponsor a Mile page:  www.bit.ly/jennsMiles   C’mon, my fundraising thermometer (on the blog) is colder than New England in winter right now!

Disney Marathon, January 12th, 2014.  I accomplished a few “firsts” this year, one was running my first marathon with my husband—together for 26.2 miles.  Well actually we were together for the first 18 miles then decided it would be best to finish independently and we were still speaking to each other after!  I wrote about the race last February on the blog (here) https://jennsbostonrun.com/2014/02/06/weblog-wednesday-2/ and it was pretty fun.  The weekend was unfortunately cut short by a sick child at home so it was also my fastest turn around for a marathon weekend.  In on Saturday, out on the first flight Monday.

The 118th Boston Marathon and 25th year of Dana-Farber Marathon Challenge!  This was a great race and experience all around.  Can say enough about it and you can read my race report here: https://jennsbostonrun.com/2014/11/10/the-2014bostonmarathon-running-again-2015/

Wallis Sand Half Marathon.
This one has become a favorite of mine since it’s it runs through my childhood ‘stomping grounds’ and past the street where I grew up.  This year was special in that I placed in my weight category!  More to follow about my thoughts on running in your weight class vs. age group but I am all for it.   I have no chance of winning a race in my age group but weight class, yes!  I didn’t run my fastest time but it was enough to place 3rd (I think) and get a medal in the “Athena” category (165+lbs) which is comparable to the male “Clydesdale” category.  Athena has a better ring to it than Clydesdale too. Also this race does not give finishers medals except to the top 3 finishers in each category so this medal is extra special since only category winners get the medal!     Thank you Wallis Sands Half!   See you in 2015! www.wallissandshalfmarathon.com

B.A.A. Half Marathon.
This was the second time that I’ve run this race and I ran into some Dana-Farber friends on the course and at the DFMC tent.  It runs along the ‘Emerald Necklace” and then through the Franklin Park Zoo.   I saw a camel but kept looking for a red panda.  They had a lot of posters of the red panda but unfortunately we did not pass by that enclosure (pandas are my daughter’s favorite animal).   The finish line had the best amenities of any race this year.  They served hamburgers along with the usual bananas, bagels and Gatorade.  It was the best hamburger – or I was just really hungry.

Seacoast Half Marathon  www.seacoasthalfmarathon.com
This is my other hometown favorite race that’s in my backyard.  I ran it with my friend Mik and it’s become a tradition to have victory tacos at Loco Coco’s Tacos in Kittery.  This year I hadn’t been training consistently and the cold weather at the start was a bit discouraging but we persevered.   The race turns into the local high school and runs up over a small hill to the finish about 0.2 miles.  My family was at the corner and my 9 year old daughter ran the last 0.2 with me.  I love this picture, she looks like she is walking on air. 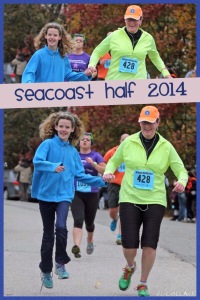 Those were the highlights from 2014!  Here’s to a running start to 2015!  I’ll post my 2015 goals and race calendar next, why rush into anything right?  Thanks for reading and please do donate to Dana-Farber. – Jenn

Seen at the beach before the shutdown. Still have my super secret run routes tho. #comebacktour2020 #stayhome #runsaferunsolostaysane